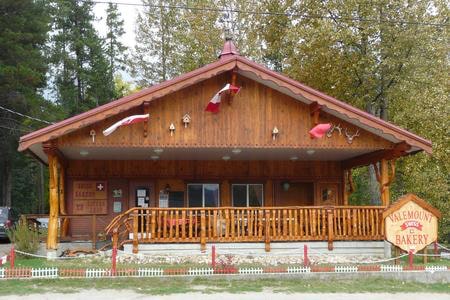 Silvia and Bogdan discovered Valemount 7 years ago while hiking in the area. They met the former owner by chance and he mentioned he was thinking of retiring. Bogdan’s dream was to one day own a bakery and the idea of taking over the business became a reality.

This little bakery has quite the reputation amongst the locals and tourists for being the place to go for all things delicious. Its not unheard of for folks to drive an hour or two out their way for some Swiss Bakery delights.

True to authentic Swiss ingredients, they use original Stollen Spice from Europe when baking Stollenand Christmas Stollen bread. Other speciality items include, Zopf, and homemade pasta.

When asked what their biggest challenge has been thus far they say "maintaining their good reputation". They remain consistent in delivering excellent baking, breakfast, lunches.

Did we mention how great it is to be greeted by Silvia? Her smile and infectious cheerfulness are reason enough to stop by. Its been over 6 years since they served their first customer. "We love living here, the community is great. We love the lifestyle the Robson Valley Region provides. Where else can you can you bike, hike, fish, run, kayak minutes from your door" 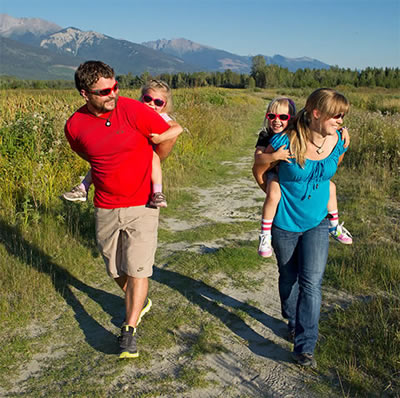 Curtis Pawliuk came to Valemount from Prince George in 2001 for an outdoor recreation and ecotourism program. That's also when he met his future wife, a Valemount local.

The move opened his eyes to small-town living and introduced him to all the great stuff the valley has to offer – both the mountains and the people. He worked away for a while, in the adventure tourism sector, but returned to Valemount off and on, always with the intention of making it his young family’s permanent home.

Like in many small communities, "You often need to create your own opportunities," says Curtis. And his passion is mountain snowmobiling.

"My snowmobile has given me so many opportunities to see places that only people with helicopters will ever see, and to meet some amazing people along the way."

Curtis recognized a need in the local mountain snowmobiling community – avalanche education and mentorship. With more and more people venturing into the backcountry, there was a real need to encourage and educate people in assessing and avoiding the risks posed by avalanche, and a dearth of training options.

So Curtis set up Frozen Pirate Snow Services, which specializes in avalanche education and mentorship, and offers a combination of clinics, riding instruction and on-mountain guiding. The combination has been a great hit for snowmobilers who come for the weekend, and want to learn the safety required, but also want time in the mountains.

"I am extremely passionate about, and believe in, what I am teaching and I truly love sharing the backcountry with others. Frozen Pirate is by sledders for sledders."

Valemount is a hub for recreational activity and one of the best places in the world for mountain sledding, he says. The clients his company need were already coming here, they just needed to be marketed to and encouraged to become safer backcountry users.

Frozen Pirate Snow Services is filling a void, and supporting other services offered here, while supporting a good direction for winter tourism opportunities.

And it means Curtis gets to spend lots of time where he wants to be – in the snow in the mountains.

You’ve probably seen the bright green van parked conveniently off of 5th Avenue, Valemount’s main drag – that is the Funky Goat Eatery, and David Grant is the chef and entrepreneur behind the sliding door. 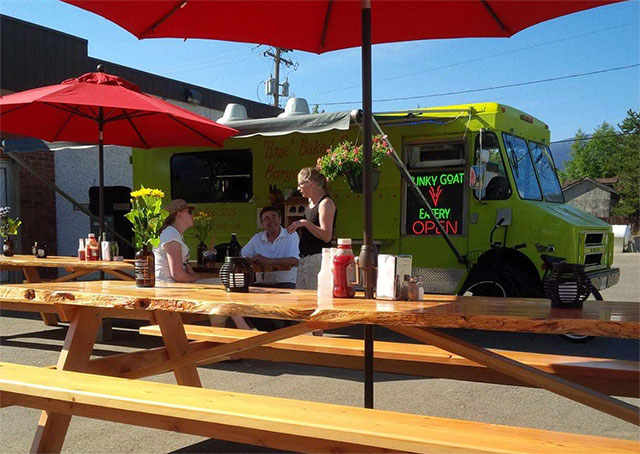 It was 2001 when Dave decided to make the move from Jasper to Mount Robson. Hailing from Ontario originally, he attended culinary school at Canadore College where he was taught by a classically trained French chef, Daniel Esposito.

Dave was there in 1997 during an official royal visit, where he and his classmates were able to prepare the royal lunch, as well as meet the Queen and Prince Philip.

After school he moved from Ontario to Jasper, where he worked as a chef at Jasper Park Lodge for three years.

Family came later, once he met Karen at a Jasper sushi bar. Now the couple spends time with their five-year-old daughter Blake. You can typically find Dave and Blake spending quality time fishing the Fraser River together.

When asked how he came up with the idea to start a food truck business, Dave said, "By fluke - I was looking to get back into cooking, and ended up online looking for a food truck or trailer."

He explained that most food trucks for sale are typically from down in the states – not close by any means – but one day a food truck popped up in Salmon Arm, he drove down for a second time to check it out (the first one being a dud), and the rest is history!

At the time, Valemount didn’t have any by-laws pertaining to mobile food. "I dealt with resistance from the community, and costs for maintenance, labor, vendor fees. It took about a year and half to get everything squared away."

The Funky Goat Eatery has been open now for its fourth season, and Dave’s hard work and determination has opened the door for other mobile vendors who may want to come to Valemount.

Those same preserving traits are what make it possible for Dave to drive 30km (or about half an hour) into Valemount from Mount Robson. After a couple bad road experiences, his availability in winter months is definitely weather dependent, but you can find Dave parked in his usual spot most days out of the week.

"My five-year goal is to have three restaurants," said Dave of the future. He does have an eventual move closer to town planned at some point. And as a community, we’d definitely benefit from his creative genius when it comes to food.

"Now my free time is dedicated to fishing and sleeping," he said when asked what he loves most about living in the Robson Valley. He loves to walk over to the Fraser River to try his luck.

Dave is a true on-man operation who brings his passion for food to the Robson Valley – that's why he's an RVR success!

Lyn and James are the new owners of the Bell Mountain Motel in McBride. Coming from another nearby community, purchasing and staying within the valley was a great fit. Today, the Motel continues to be renovated and improved, and they continue to capture more of the lucrative tourism market that frequents the valley. This is Lyn and James' story...

Jill purchased the Beaverview RV Park a number of years ago and continues to love the pace of the valley life. Beaverview has grown and thrived, servicing the tourists who enjoy the valley during the summer month. This is Jill's story...

Arnold is the Manager of the Valemount Pines Golf course. A long-term resident, Arnold fell in love with the mountains and the friendliness of the valley immediately. Arnold continues to see changes in the valley and enjoys helping the golf course connect with locals and travellers. This is Arnold's story.